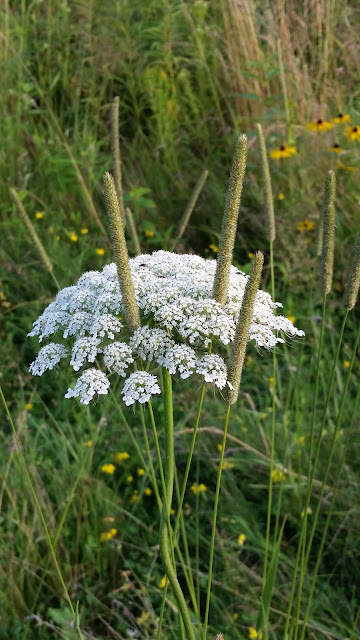 Meadows make for interesting interactions among its multifarious inhabitants. Here, the umbel of a wild carrot looks like a white lace parasol adorned with rabbit ears. The golden wands are the seed heads of meadow cat's tail, also commonly called Timothy grass. Rabbits, of course, love carrots, and the root of Daucus carota smells like carrot and is edible when young. Wild carrot looks a lot like poison hemlock, but the carrot smell is one way to distinguish the two, though who's going to dig up a possibly deadly plant to smell the root! In fact, D. carota is the great-grandmother of our domestic carrot. 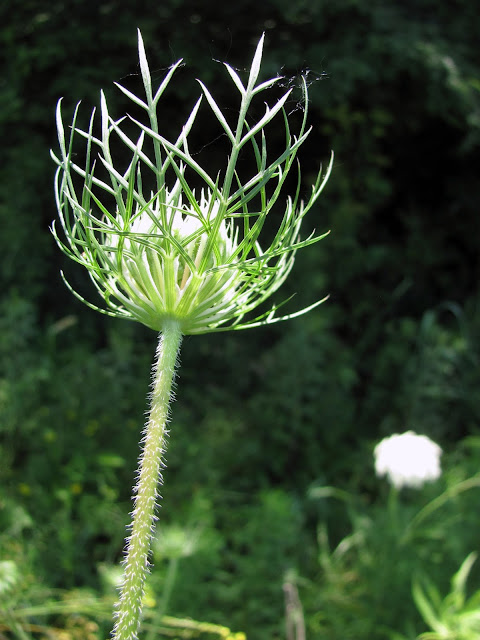 A spider has left a silken veil on the topmost tips of the basket of bracts enclosing a bud. From this interwoven cup, we see why wild carrot is also called bird's nest. The fine hairs on the solid stem are another way to distinguish it from poison hemlock. 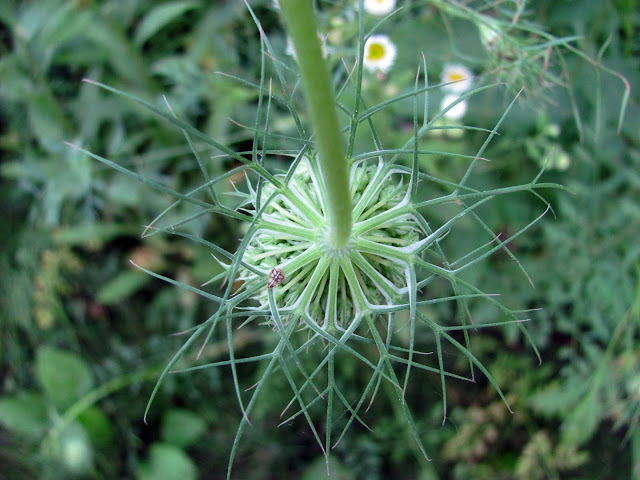 This bud, hanging head down, reveals the twelve rays of spiky bracts fanning out from the base of the blossom. They look as sharp as the thorns of honey locust but are actually quite soft. 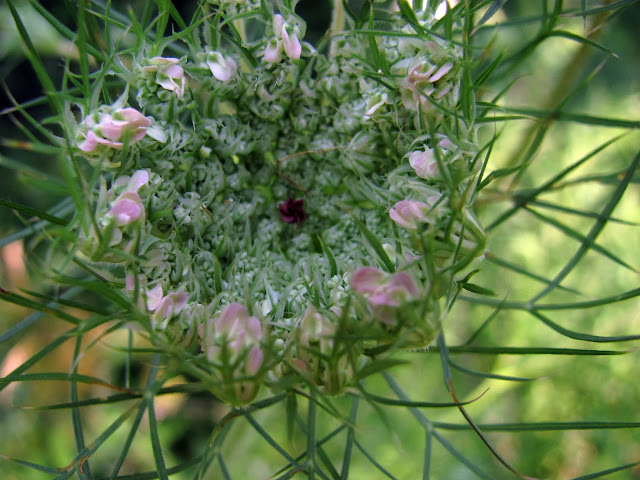 Sometimes the flowers on the rim of the unfolding umbel blush a delicate pink. 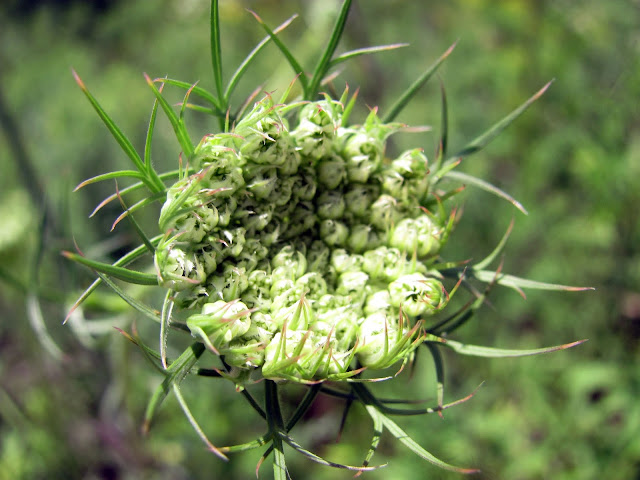 This emerging blossom sports pink on the tips of the bracts, like fingernail polish. 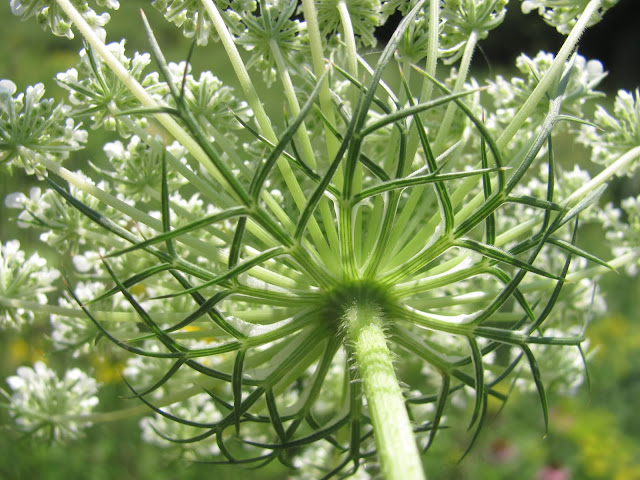 The three-pronged bracts beneath the umbel spread out as the umbel swells from concave bud to convex blossom. 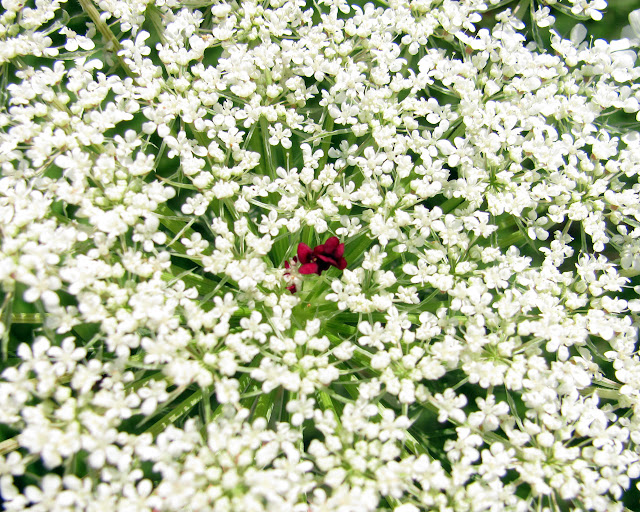 In the heart of the fully blossomed umbel sits a tiny red flower, designed to attract insects for the purpose of propagation. The spot of red is supposed to represent a drop of blood from when Queen Anne pricked her finger on a needle while making lace. If you place the white flower in a bowl of water with red food coloring, as we did in a grade school experiment, the plant will draw up the water and the flower will turn red. I wonder why the plant doesn't make the whole flower red to attract more insects. Too much of a good thing? 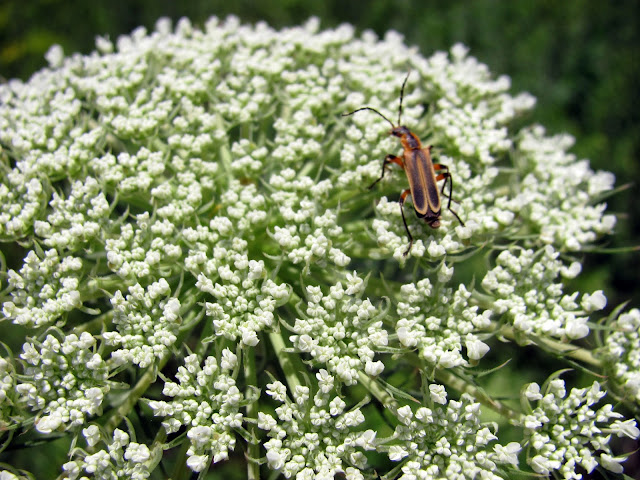 Perhaps this insect is drawn to the red heart, and as it walks across the dense lacy carpet, its feet may pollinate the tiny white flowers. 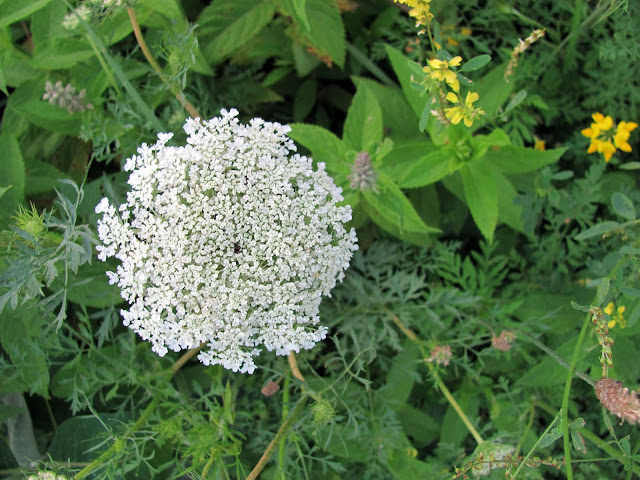 The leaves are also lacy, but chemicals in the leaves can cause a skin rash. A good defense for a pretty flower, and probably why the plant is not eaten by deer. 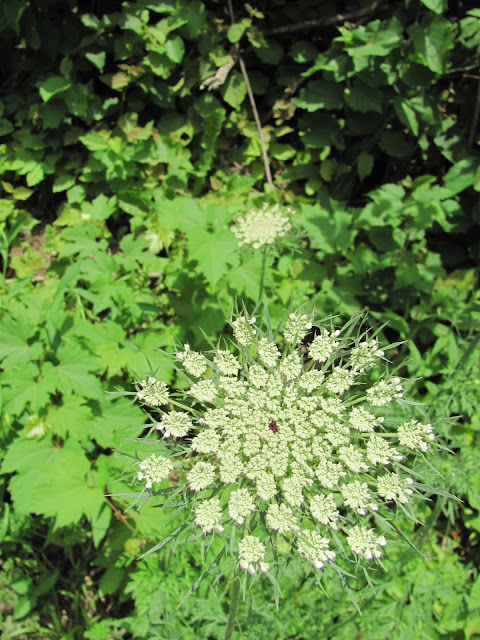 Sometimes the blossoms look like snowflakes falling in summer. 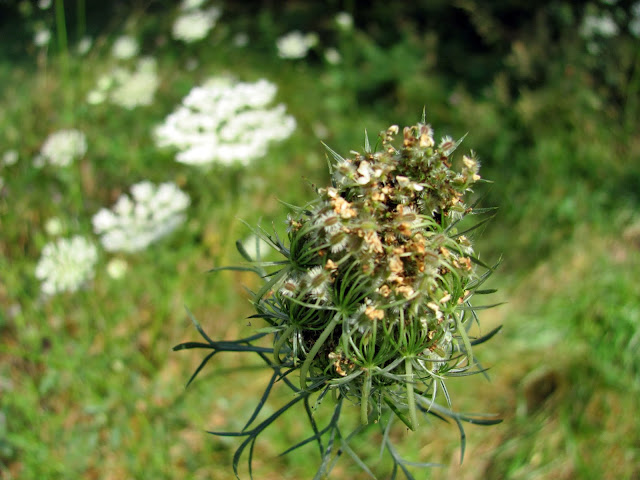 When the flower goes to seed, it folds inward, encased in the spiky protective bracts. Finally, the seed head falls off the stem and becomes a tumbleweed, flying with the wind, carrying its progeny to new frontiers.
Posted by Care Connet at 8:33 PM No comments:

curving back on air 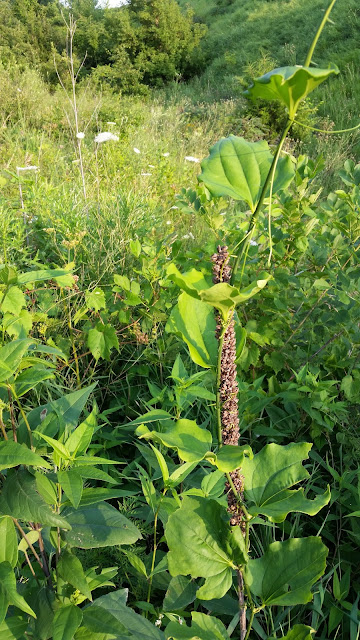 Down by the mailboxes I notice a bindweed vine wrapped around a seed head of some plant I don't recognize. The vine, grown beyond the top of the dry stalk, has launched into the air, its recurving tendrils seeking something else to embrace. 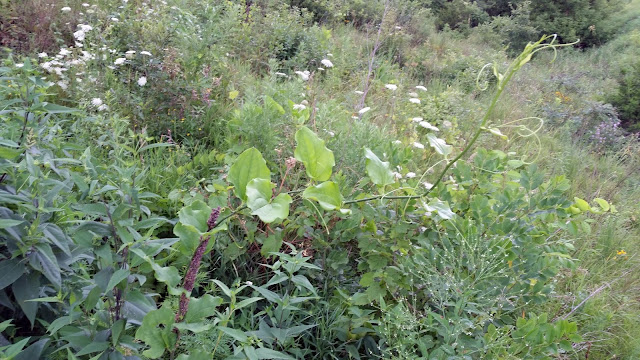 Five days later, the vine is shooting sideways past its launch pad, pulling the seed head with it. The tendrils curl back on themselves, grasping at air. 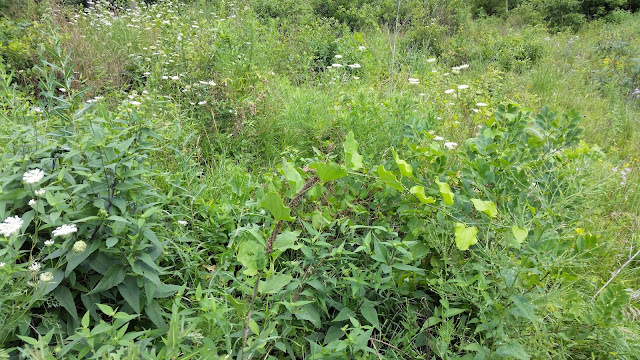 Another six days and the vine has fallen over in an arch, the seed head bending down with it. Soon the seeking tendrils will touch a low growing plant and bind the vine back to the ground. All that work, for what?
Posted by Care Connet at 8:17 PM 1 comment:

curving back on white 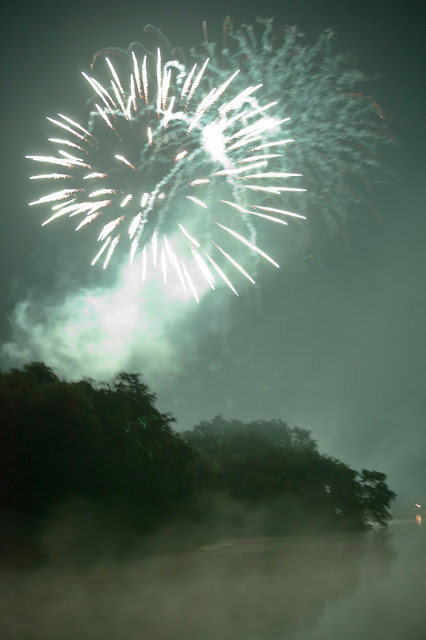 curving back on white
plumes, green smoke spiraling down
over the night lake

One of the first fireworks to go off looks like a question mark rising over the dark line of trees along the east side of Pleasant Lake. But what is the question? 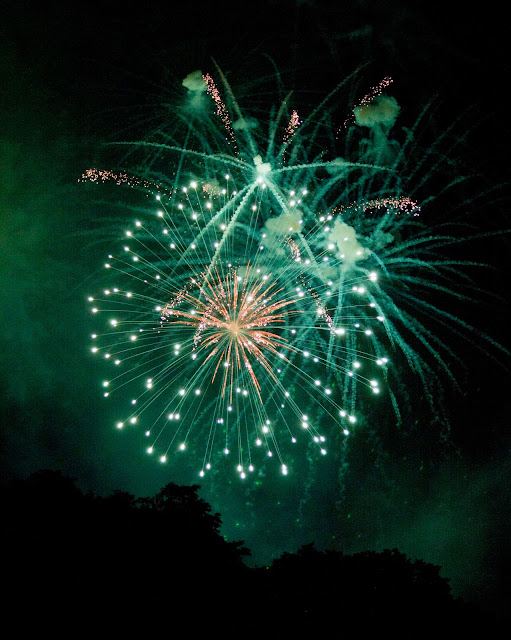 Independence Day falls on a Saturday this year, so fireworks in Fairfield are happening on the actual Fourth of July. Some years the event is moved to a different date, to suit work schedules, I guess. I don't think the city planners feel like John Adams, who refused for the rest of his life to attend celebrations on the 4th, because the Declaration of Independence was signed on the 2nd of July, though it was adopted on the 4th. 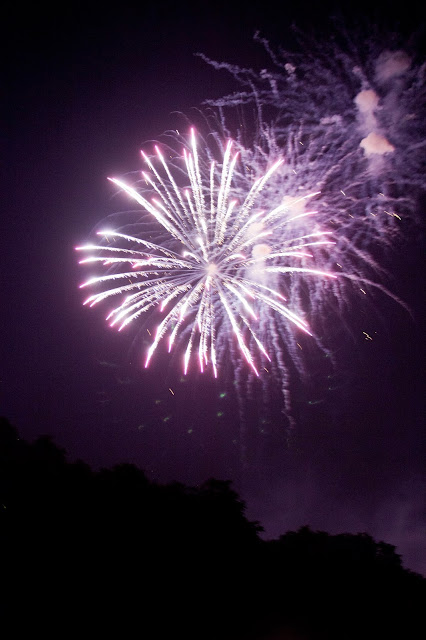 Last year the show was rained out, so this year we are getting a double dose, some with colors I've never seen before -- turquoise, lavender, orange. 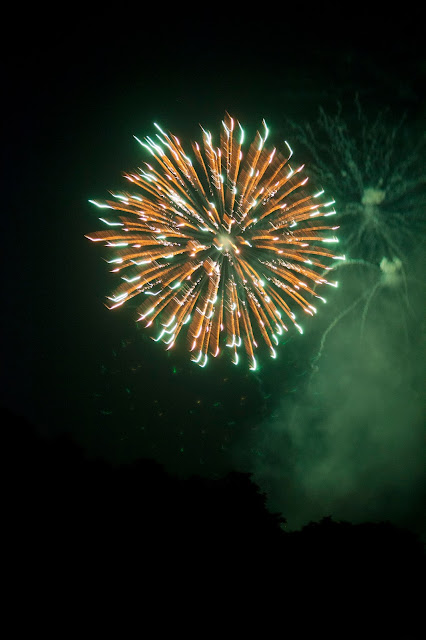 We find space on the grass in a clearing on the north end of the lake, in the midst of a small gathering of like-minded people avoiding the crowded beach on the south end. 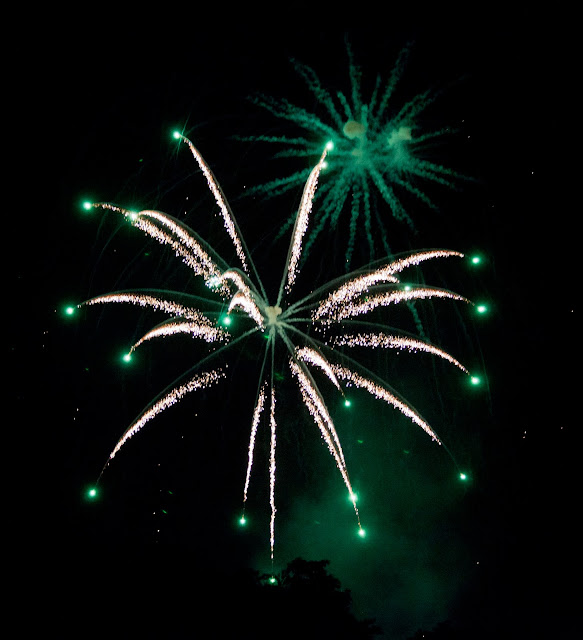 We cheer at each unique pattern of cascading plumes and points. 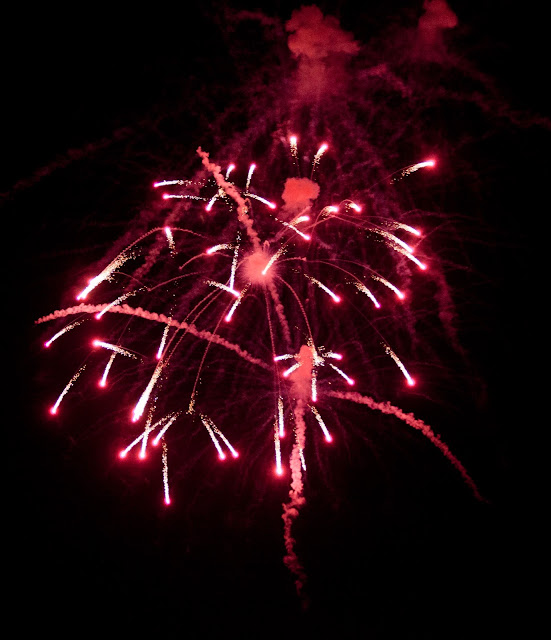 A light breeze keeps the mosquitoes away. 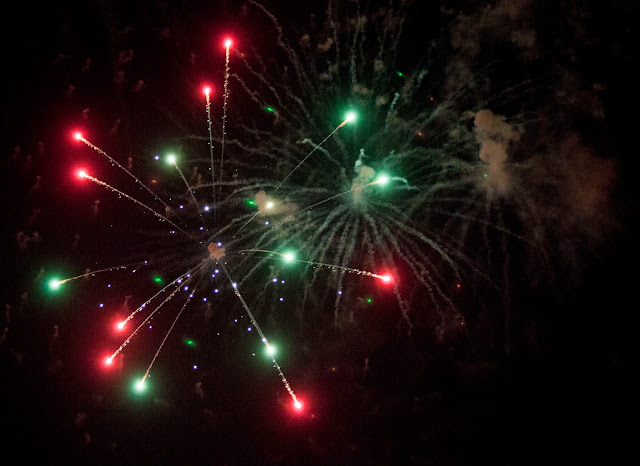 And maybe the smoke drifting our way across the lake from the incendiary explosions. 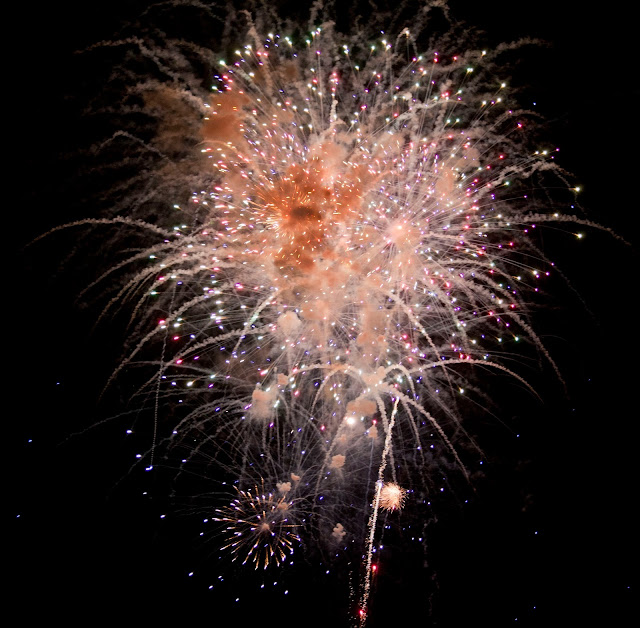 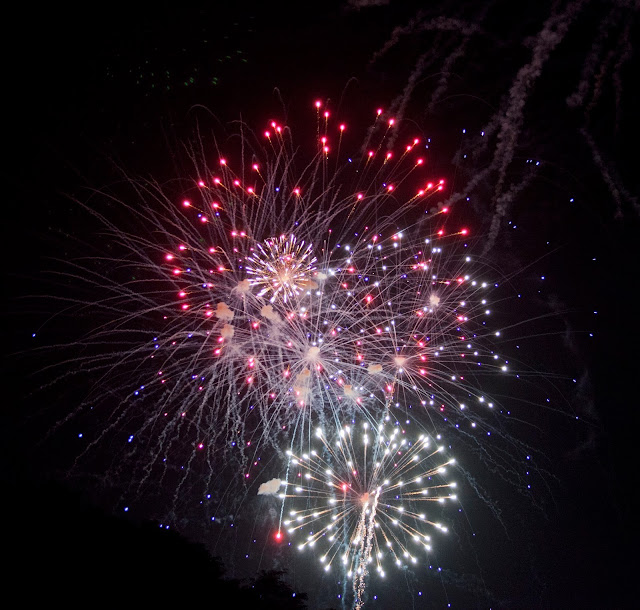 And some look like photographs of supernovae or colliding galaxies. 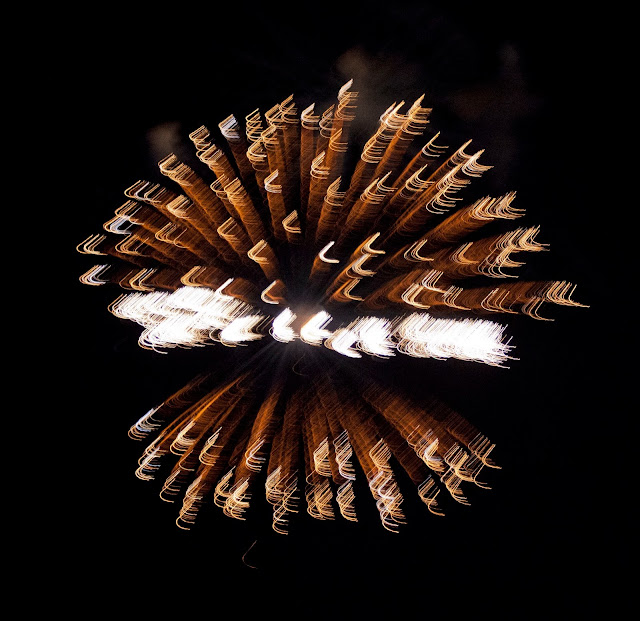 And some are signs of light, appearing for a heartbeat in the blackness, mysterious answer to an unfathomable question.
Posted by Care Connet at 3:25 PM No comments: