in a window box wet 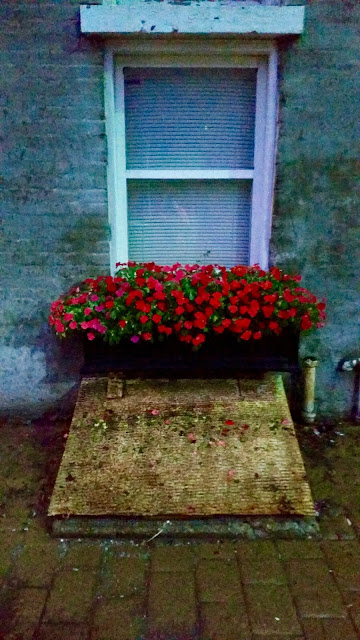 First Friday Artwalk on a wet October evening, I am making the rounds of art galleries. Walking down the wide brick alley connecting the courthouse to the square, I pass a window box full of petunias. The red flowers explode like fireworks in the dim light, sparkling in the rain and showering petals onto a slanted cover. The hatch may once have been used for delivering coal, but now it serves as a canvas for an impressionist tableau. The old brick wall, glowing blue in the low light, accents the brightness of the blossoms. Here, in this out-of-the-way place, a still life as beautiful as anything in a gallery.
Posted by Care Connet at 6:22 PM No comments: 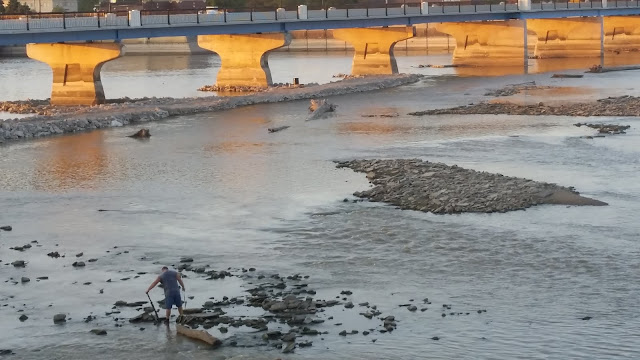 Record-breaking heat in late September. During a break between choir rehearsal and the John Williams concert at the Ottumwa Bridge View Center, I step out of the cool hall in my long black concert attire. After this summer's drought, the Des Moines River runs quite low, revealing shoals of gravel. A man is wading in the shallows. He pokes around on the bottom with a pole that has a small round attachment on one end. I don't think he's fishing. He seems to be searching for something. Could it be a metal detector? Or a little seine for scooping up gold-laden gravel? The only gold I see is cast by the setting sun on the bridge piers. They look like angels with outspread wings holding up humans on their incessant journeys back and forth across the waters.
Posted by Care Connet at 1:06 PM No comments:

rust on a steel pan 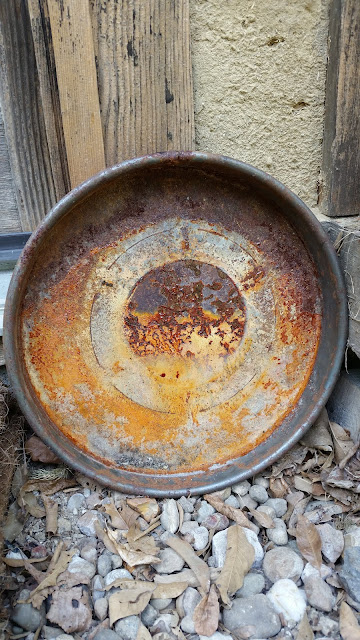 Rust, a sure sign of degradation. Left outside, the iron in this pan is becoming iron oxide, turning from gray to orange, from smooth to flaky. Eventually, the entire pan will disintegrate.

We've all experienced the heartbreak of rust. Rusted cars, rusty nails you don't dare step on, rusted bridges that collapse, whole industrial zones based on steel that now bear the epithet "Rust Belt."

But once again, as with so many anomalies, I find this pan beautiful. Something that was once plain is now adorned, if only briefly, with a colorful and intriguing pattern. I can easily imagine this as a work of art in a museum. Just search for images of rust art and you'll see what I see.

if you open the box 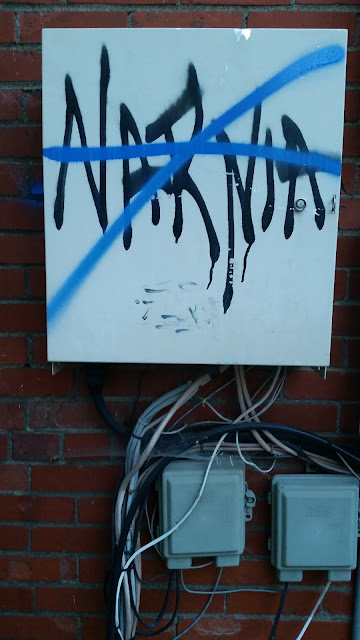 if you open the box
will you encounter a Faun
or coils of phone wires?

Graffiti is mysterious, at least to those who don't know the language. But I do know that word, Narnia, from the seven novels by C. S. Lewis. In this fantasy series, four children evacuated from London during WWII find a wardrobe in a country house that leads to Narnia. There they meet a Faun carrying an umbrella and parcels in a snowy wood and many other magical beings, including the great lion Aslan.

So why has someone written NARNIA on a telephone cable interconnect box? Is this the name adopted by a gang? Did the same person, or a rival, spray paint a big blue X through the word? And what, if anything, is the meaning of the minnow-like smudges in an oval under the word? Were they just the artist wiping paint from fingers, or some secret code?

Unlike Pandora, I did not open the box. Not physically, anyway.
Posted by Care Connet at 9:38 AM No comments: 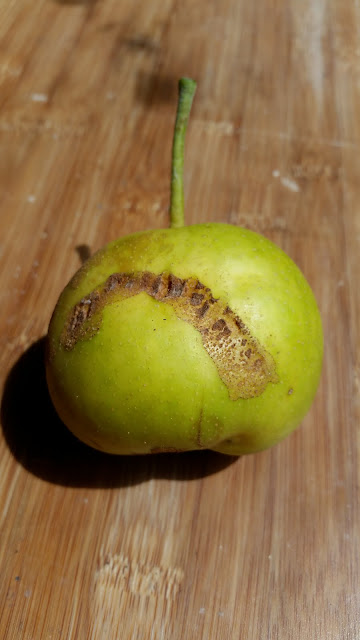 One fortunate result of this summer's drought is that fungus has not had much chance to attack our fruit trees, since it needs wet weather to infect. I have found only one Asian and one Kieffer pear with signs of scab. When it just affects the surface and doesn't crack the skin, the fruit is still edible. I know it's considered unsightly, but my artist's eye finds beauty in the crusty patterns, like rocky continents interspersed on a planet with green seas. 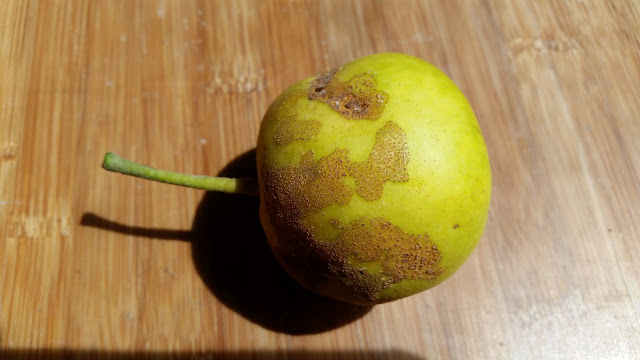 Posted by Care Connet at 2:41 PM No comments:

buckeyes in a blue bowl 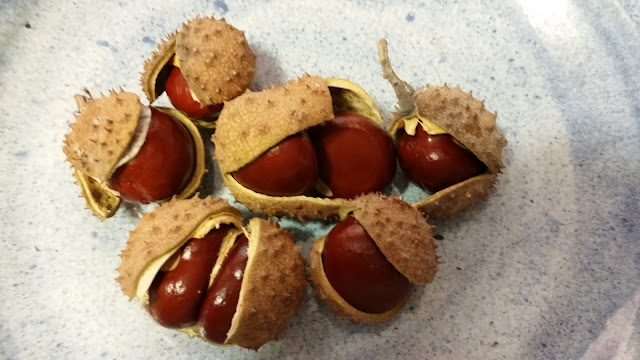 After a summer of drought, the palmate leaves of buckeyes are already turning orange in August and the nuts are falling to the dry, cracked ground. I bring a few home and watch as they split open. Smooth, shiny seeds peak out from their armored shells like chocolate bon bons. But raw horse chestnuts have another defense, tannic acid, toxic to humans. However, squirrels will chew off the thick husks and "sample" a few bites of the nuts. They can be eaten if roasted like chestnuts, but I have not tried this.
Posted by Care Connet at 2:13 PM No comments:

no one planted them 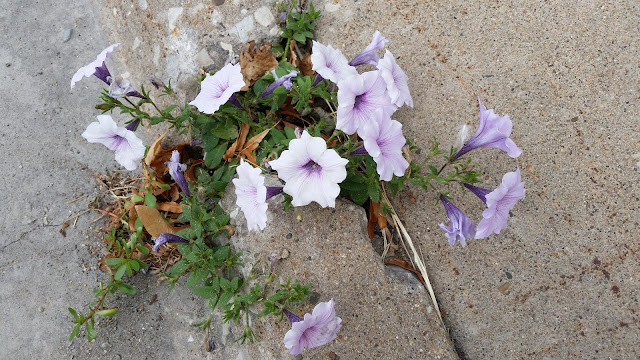 Coming out of the bank, I almost step on them, but I'm arrested by a dozen purple eyes looking up at me. How did they get there, a clutch of petunias growing out of a crack in the curb? Certainly no one planted them there. True, there a window boxes on the bank's windows, spilling over with a riot of petunias. But none of them are this lovely shade of lavender. For sure, no one watered them through this long summer's drought. Yet they are flourishing, delicate but indomitable, Nature's everlasting bounty.
Posted by Care Connet at 7:38 PM 1 comment: 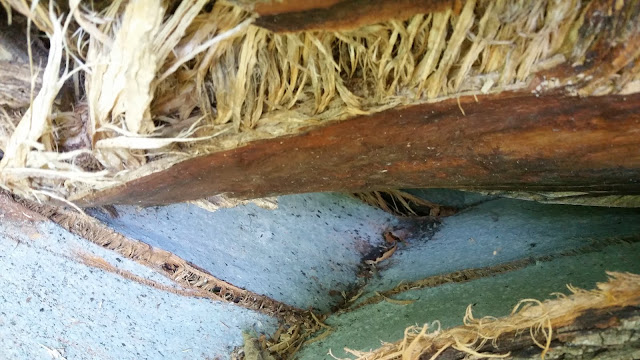 ripped apart and stained
blue by fungus, a tree trunk
opens to the sun

On a walk around the Big Island, a flash of blue catches my eye. A fallen tree, its trunk twisted open, reveals fibrous strands of the inner bark, like hair or dead grass. Part of the sapwood has turned pale blue, evidently the work of blue stain fungus, slowly consuming the heartwood. The complimentary colors of blue and green against orange and yellow make a pleasing composition out of the wreckage of a fallen tree.

Posted by Care Connet at 3:04 PM No comments: