curving back on dappled 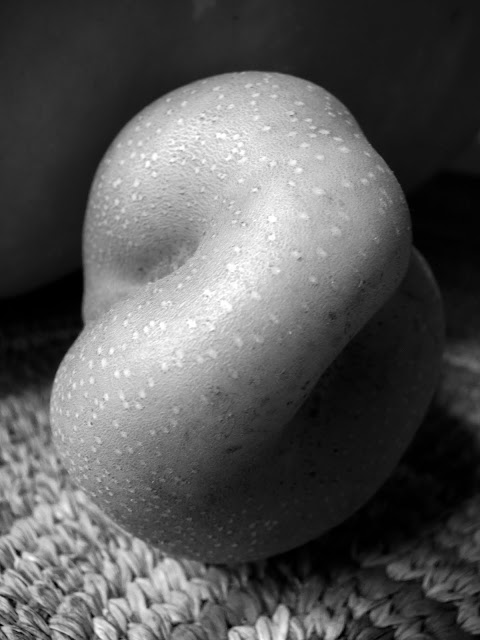 ICON gallery's Black & White Photography show opened Friday evening during Fairfield First Friday. The exhibit features 100 black and white photographs submitted by 27 photographers from Fairfield, Iowa City, Des Moines and beyond, and runs from 3 June to 23 July. I have six photographs in the show, all displayed, two by two, in the entrance area of the gallery. 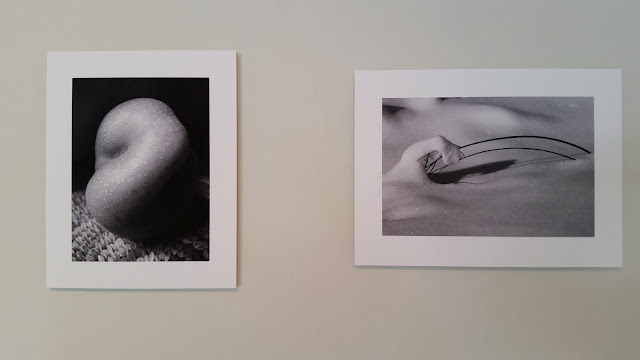 Convoluted Pear, 17" x 14", 2013: an Asian pear from our small orchard, resting on a raffia mat. We do not spray with chemicals, so our fruit are sometimes distorted by various diseases or insects, often pecked by birds or hollowed out by wasps and beetles. I have long been a fan of Edward Weston's voluptuous green pepper series, and I thought many of our pears looked like something he would photograph, beautiful in their perfectly imperfect convolutions. 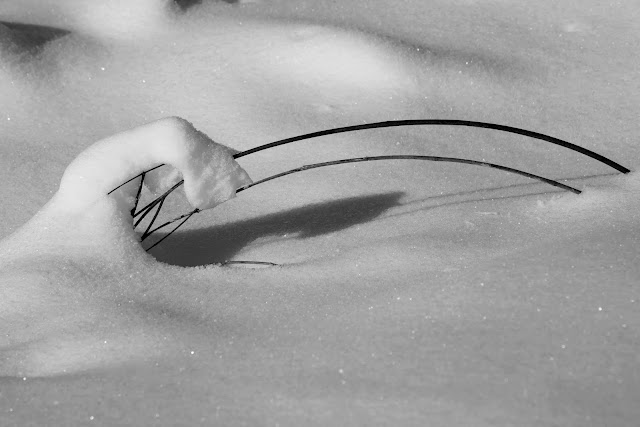 Grass Bent by Snow, 14" x 19", 2015: grass stems bent in an arch, anchored on both ends by snow. The dark lines of the curved grass stems against the snow are repeated in the dark shadow underneath the bridge of grass. 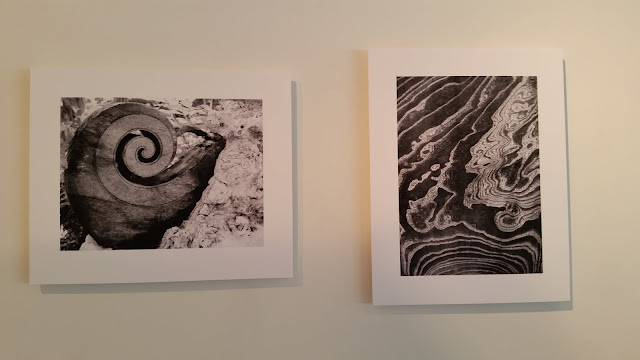 These two photographs were both taken on a visit to Japan in 2013. 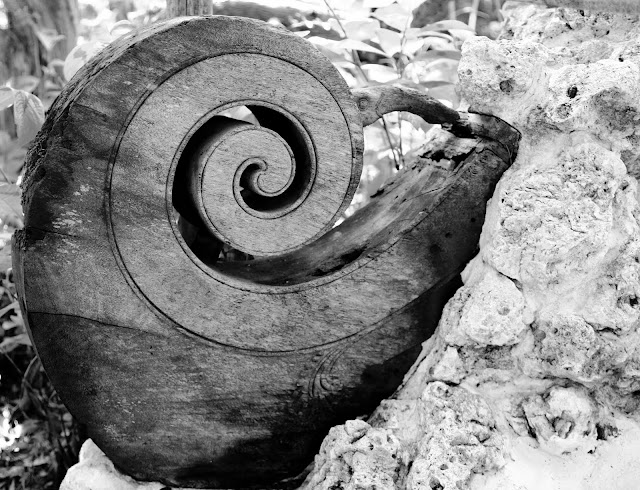 Ichiku Museum Spiral, 14" x 17", 2013: a large wooden ornament set into a wall made of Okinawan coral and limestone at the Kubota Ichiku Art Museum near Lake Kawaguchi in Japan. The museum and gardens were designed by the artist, Kubota Ichiku, who revived the lost art of Tsujigahana silk dyeing, used to decorate elaborate kimono during the 14th to 16th centuries. The museum houses a number of his kimono creations and the grounds display artworks from Asia and Africa. 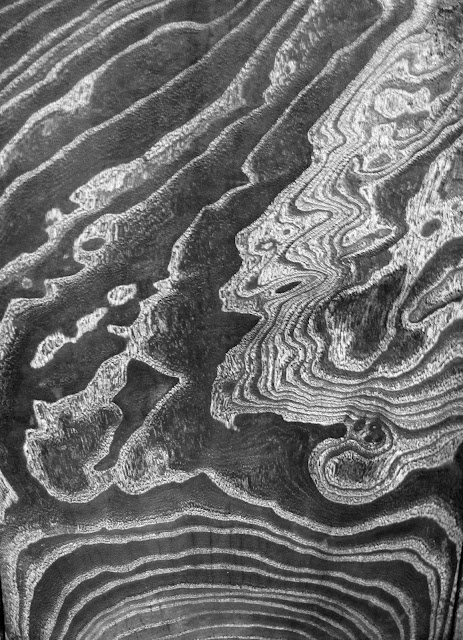 Japanese Tea Cabinet, 18" x 14", 2013: a close-up of the front door panel of a tea cabinet. I took this photograph when I was visiting my friend Hiroko Goto, a tea ceremony and calligraphy master. To me, the light and dark wood grain looks like dragon clouds over a rainbow. 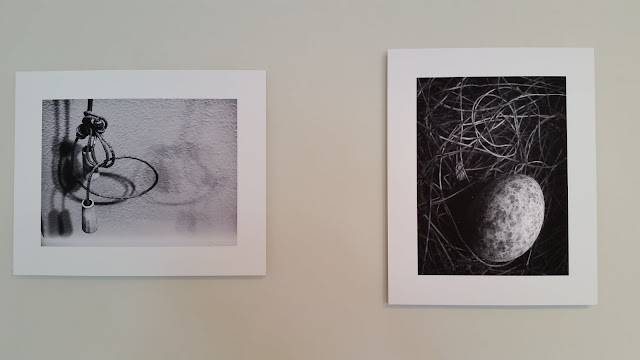 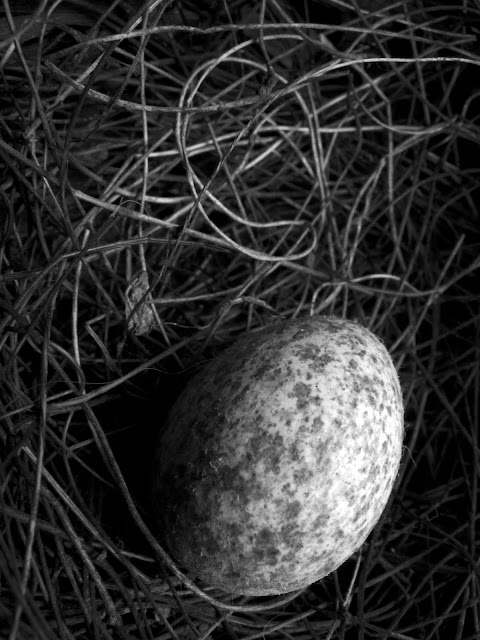 Speckled Egg in Nest, 17" x 14", 2011: a single egg in a nest I found on our property. I don't know what kind of bird laid this egg, but the oval shape nestles perfectly in the hollow woven from curving grasses. 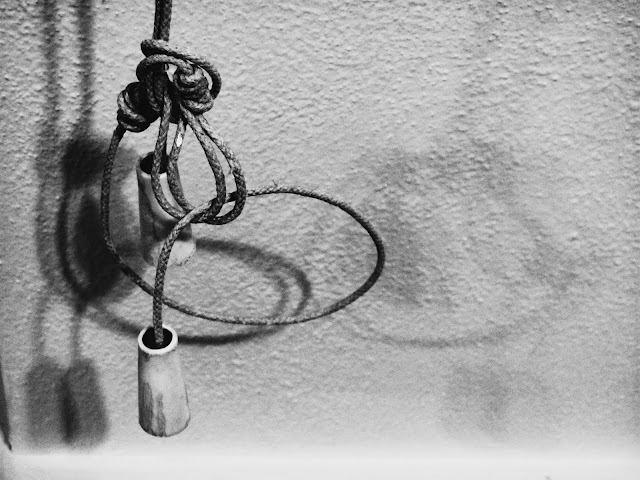 Shade Cord Shadows, 14" x 17", 2011: a knotted and looped cord to a Venetian blind with shadows falling against the stuccoed wall. I was intrigued by the repetition of curves made by the cord and two different sets of shadows.
Posted by Care Connet at 12:33 PM 2 comments: